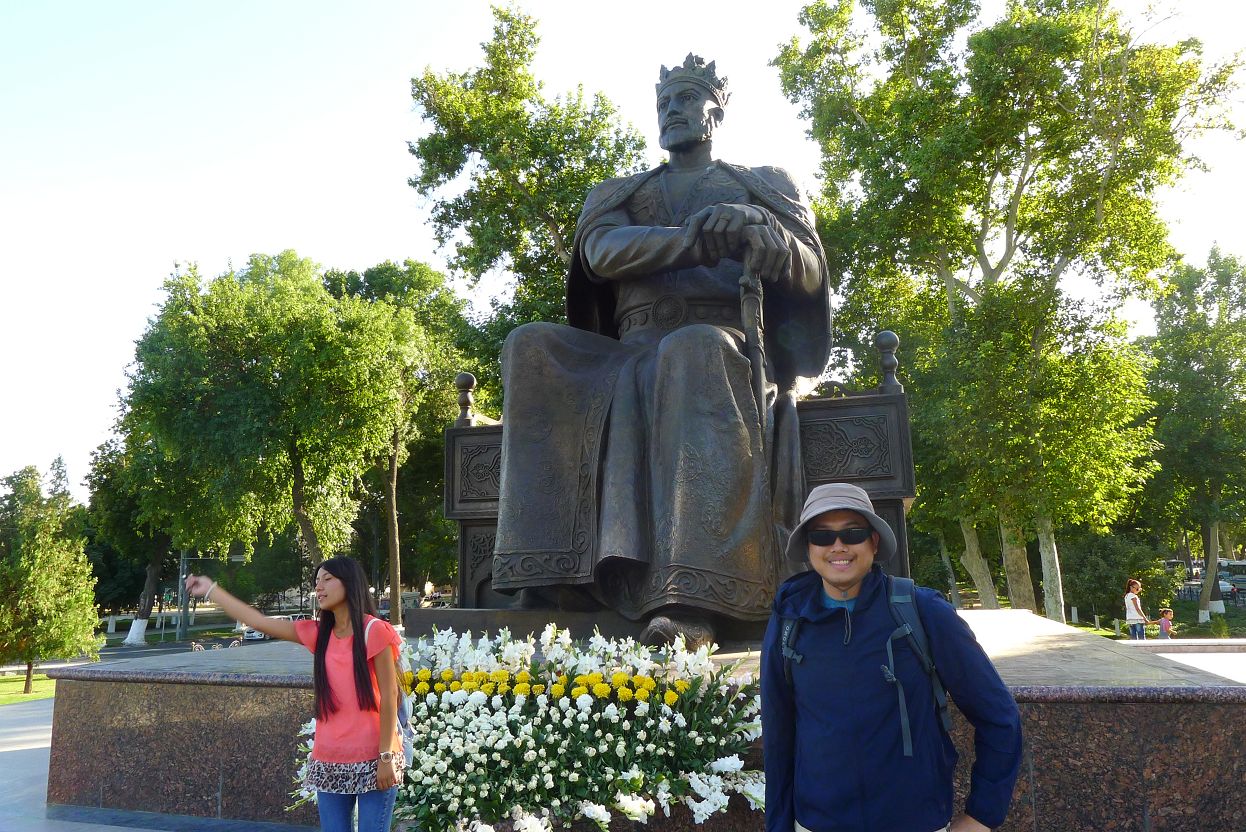 But in fact, due to the geographic location of Uzbekistan, it was occupied by different authorities in different period. In the early days, it was once a province of Persian empire. In 12th century, it was conquered by Chinggis-Khan and afterwards in 14th century Timur founded the empire which Uzbeks regard as the very beginning of today’s Uzbekistan. And several centuries later it was once again captured under the territory of USSR until it declared the independence in 1991. Since then, Uzbekistan has made a claim to head for a brighter future with its past glory of silk road. With that, it not only re-built the major cities into modern ones, but also recently established the high-speed rail between Tashkent and Samarkand. All of these had made Uzbekistan one of the more advanced country among those previous USSR nations. 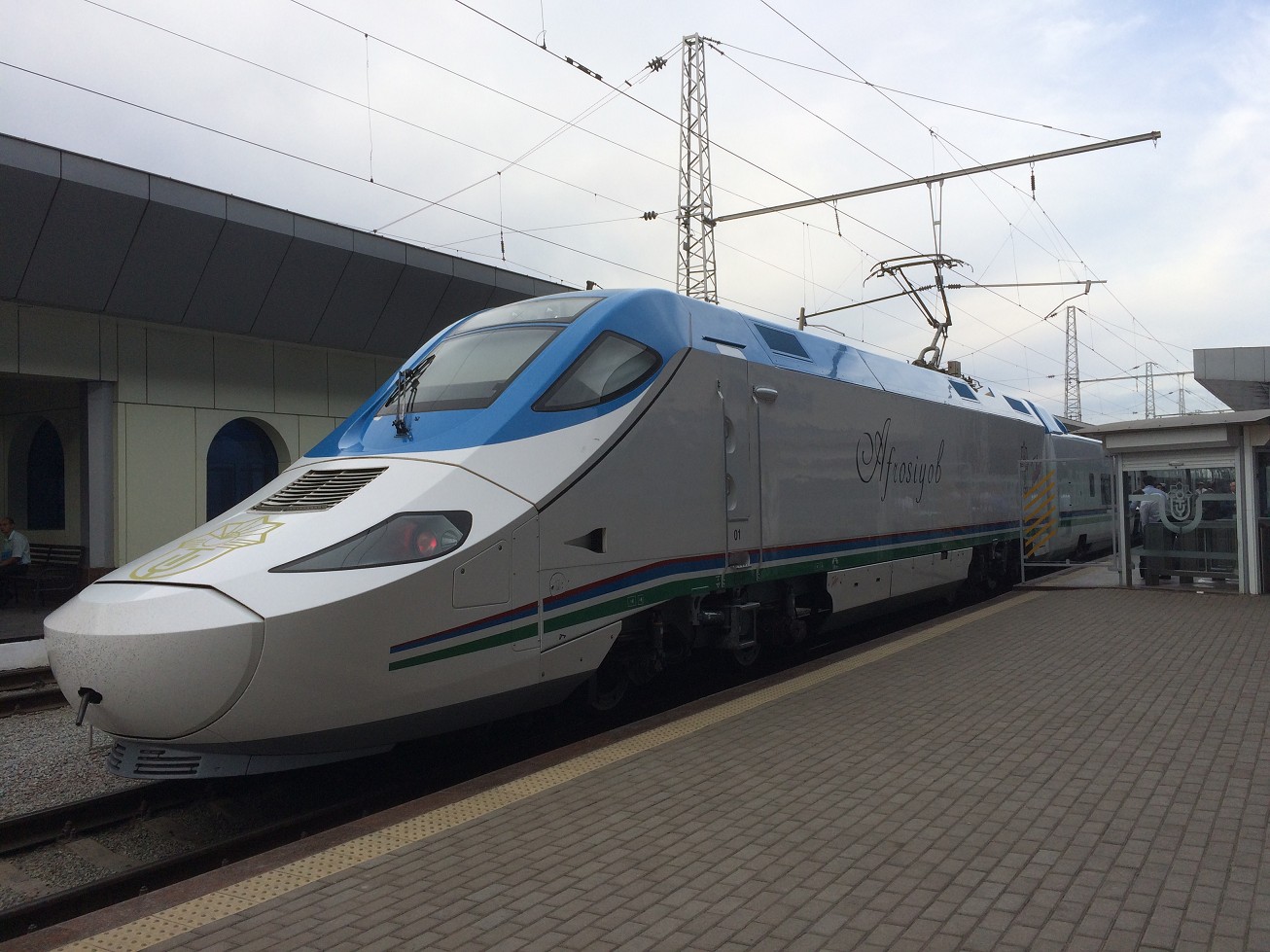 High-speed Train “Afrosiyob” in between Tashkent and Samarkand 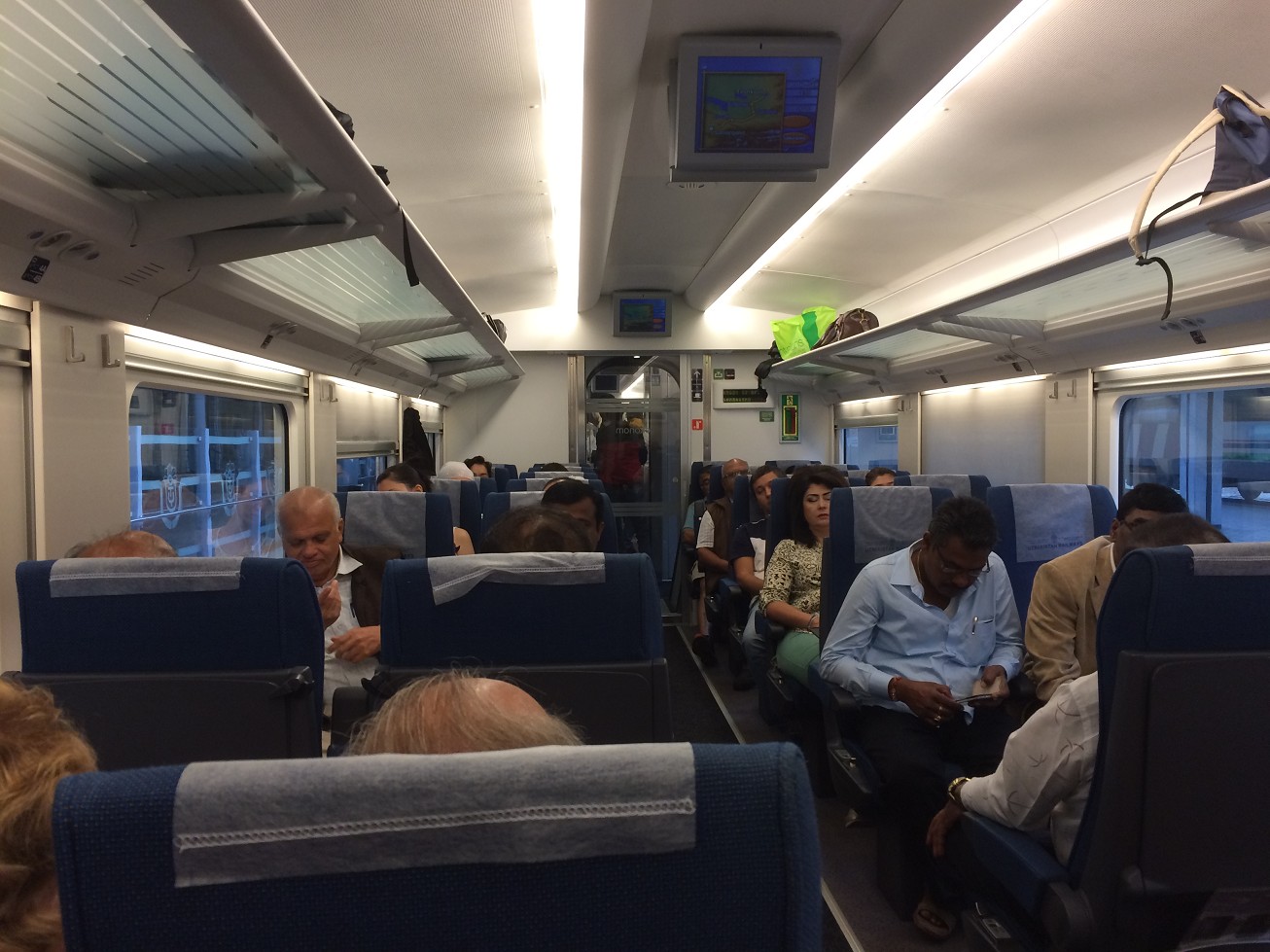 The cabin is not much different from Taiwan high-speed rail. There are even cabin crews who give you snack and drink! 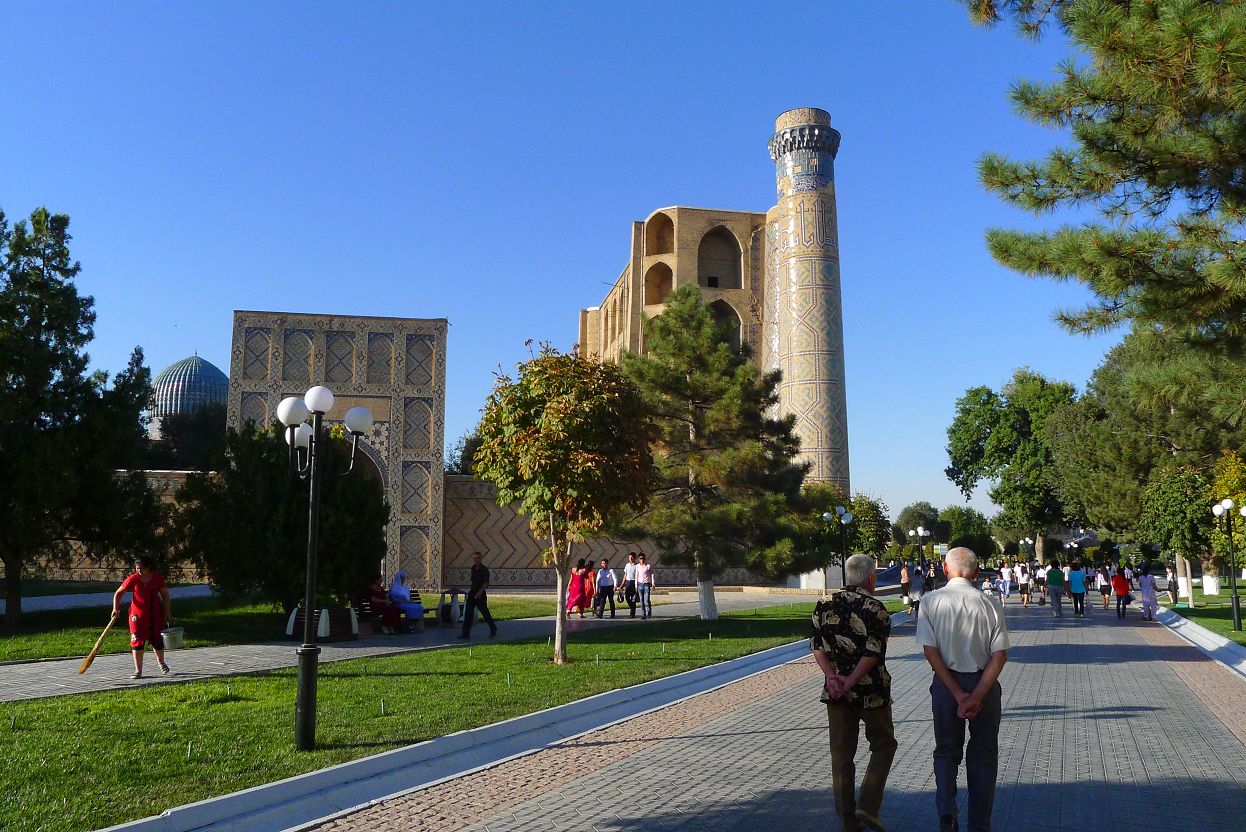 Beautiful pedestrian walkways. If without the mosque, I would think I’m in Europe.

Just before we arrived in Uzbekistan, the president of Uzbekistan just passed away and I was really worried about whether it is safe for us to visit this country. The truth proves it that there’s indeed no problem at all. People are mostly kind and we don’t need to worry to be robbed or stolen our stuff. The only thing that bother us is just the tiring negotiation with taxi drivers.

In Uzbekistan, because of the interaction of the different ethnic groups, people can look like either European or Asian. If I didn’t see them in Uzbekistan, I wouldn’t be able to identify they’re actually Uzbeks. But no matter how they look like, they are always smiling and have warm hearts. Although sometimes there’s language barrier in between us, they are willing to help when we are in need. What’s more interesting is that Miss Smile and I have become a Hollywood super stars while here. Many people wanted to take photos with us on the street! 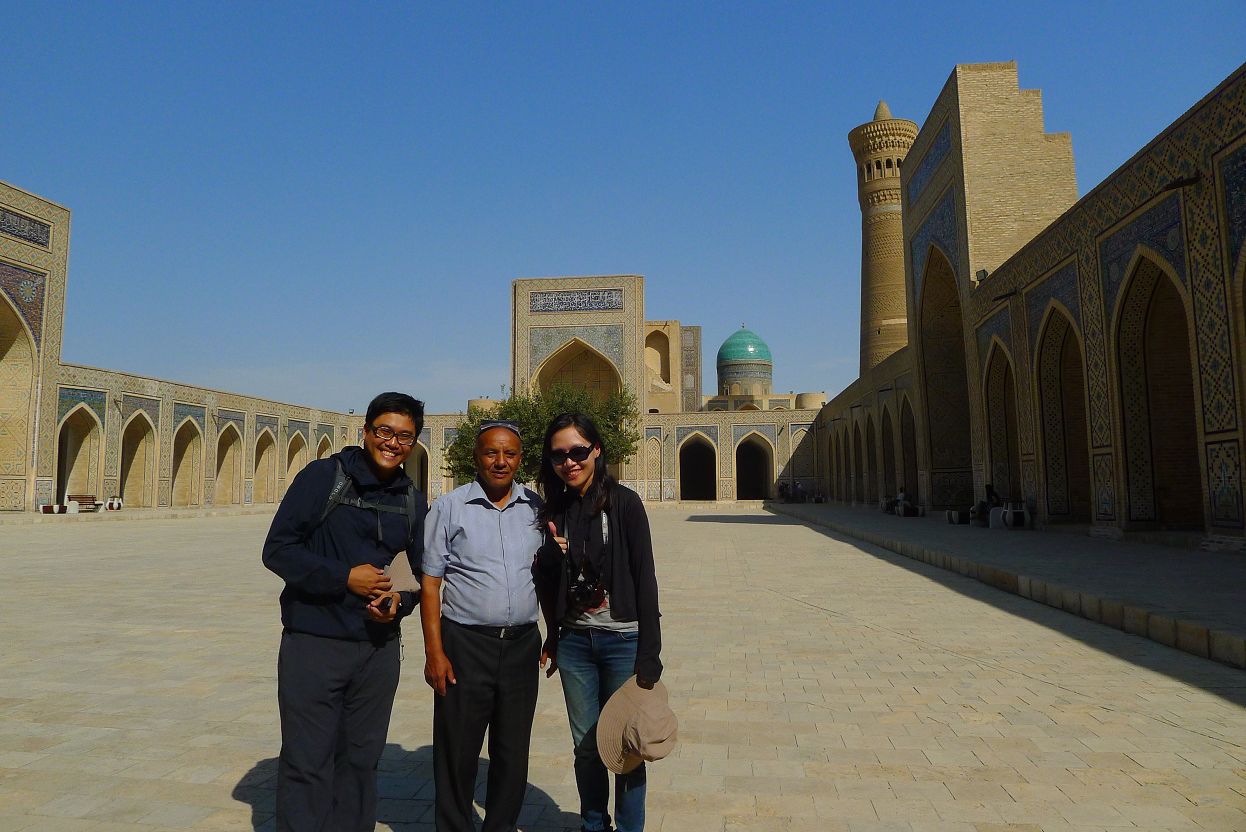 All the kids here are very out-going and always say “hello” to us with a adorable smile. Every time we see them, we couldn’t help but take many photos of them. We really wish that we could speak some Uzbek or Russian so that we could talk more to them! 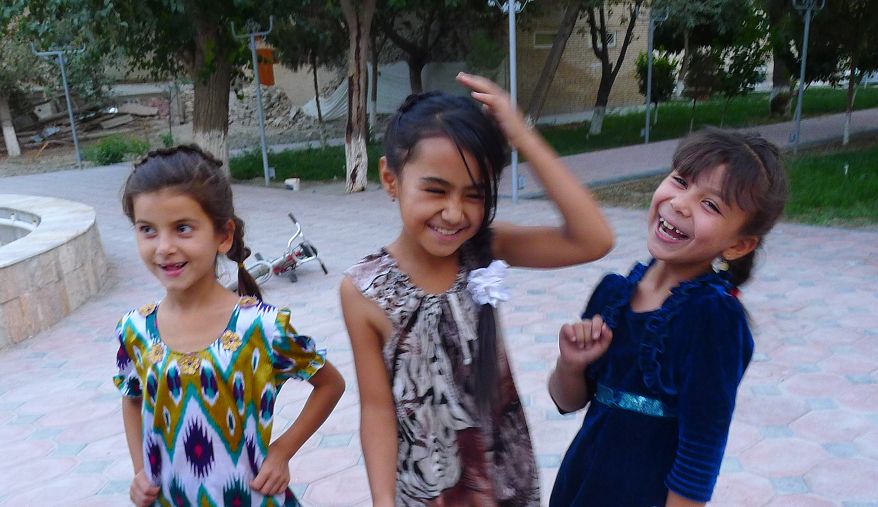 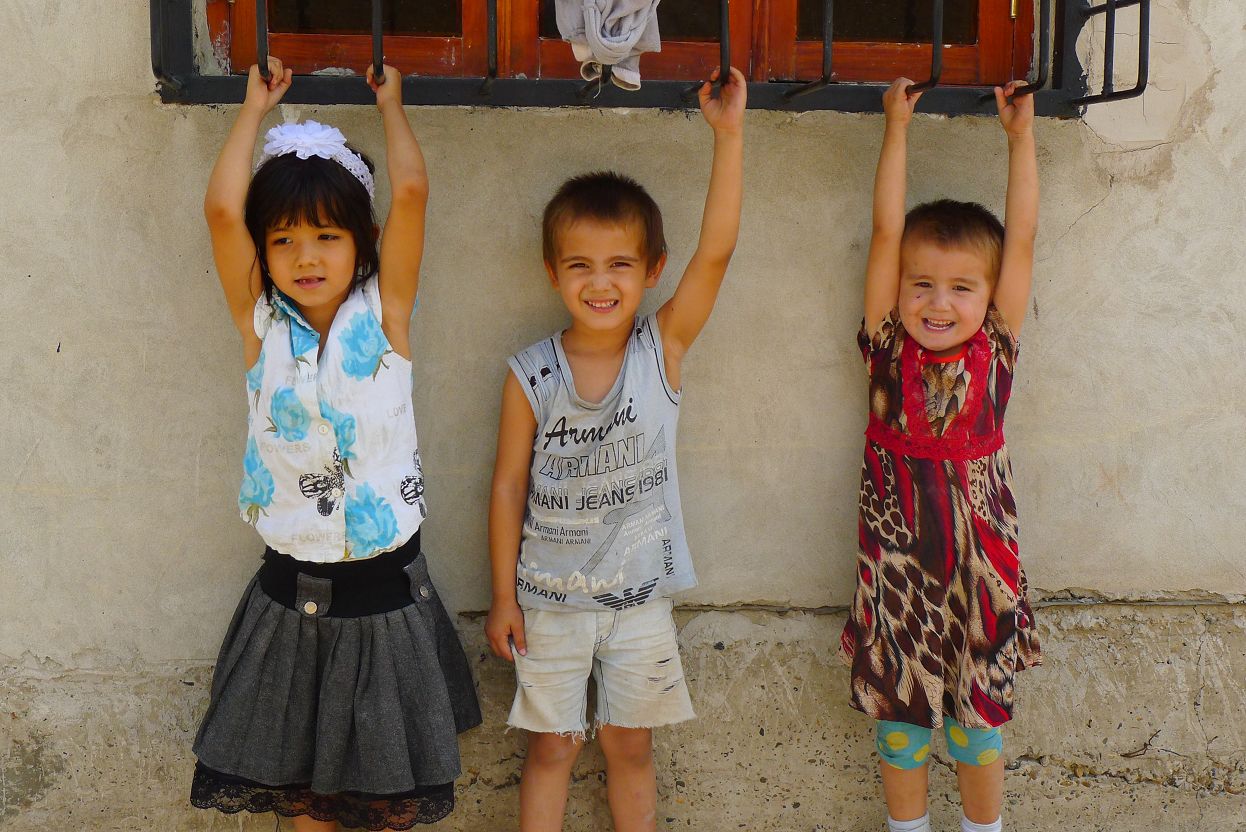 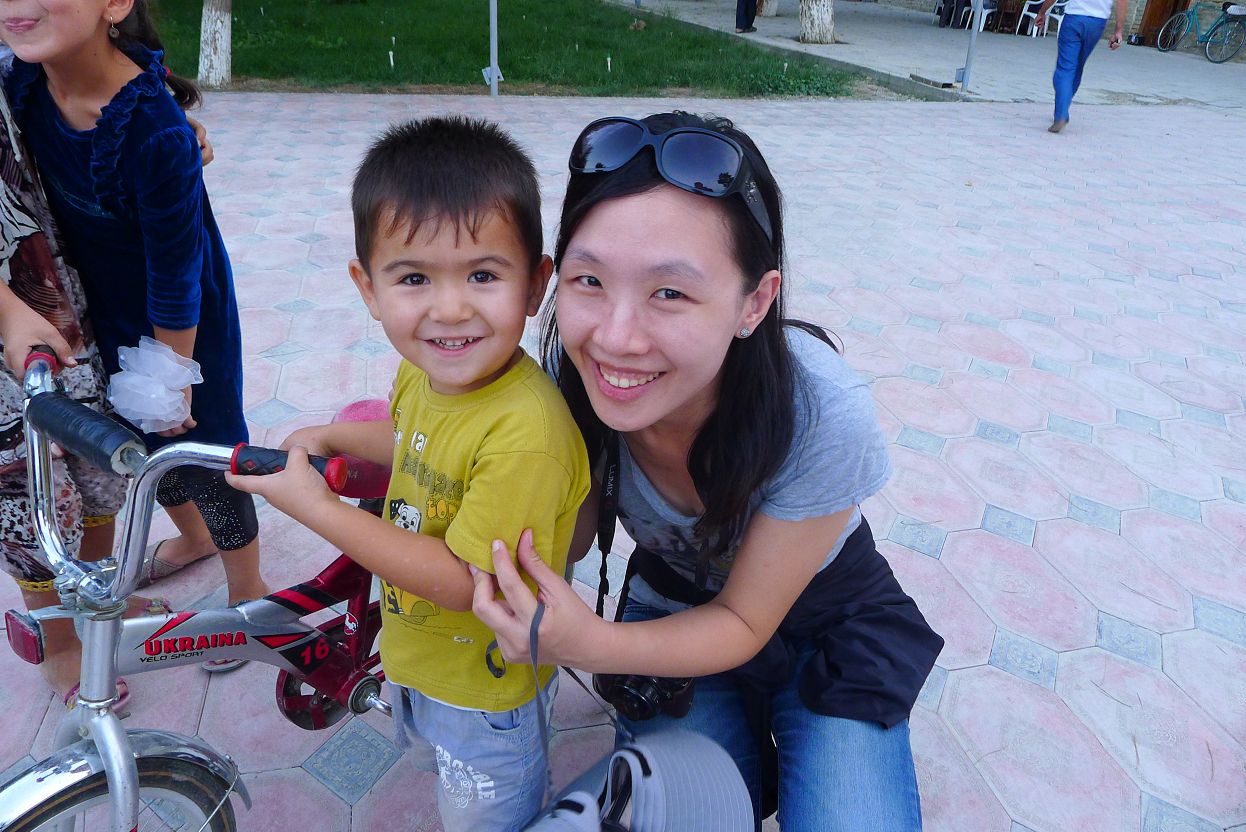 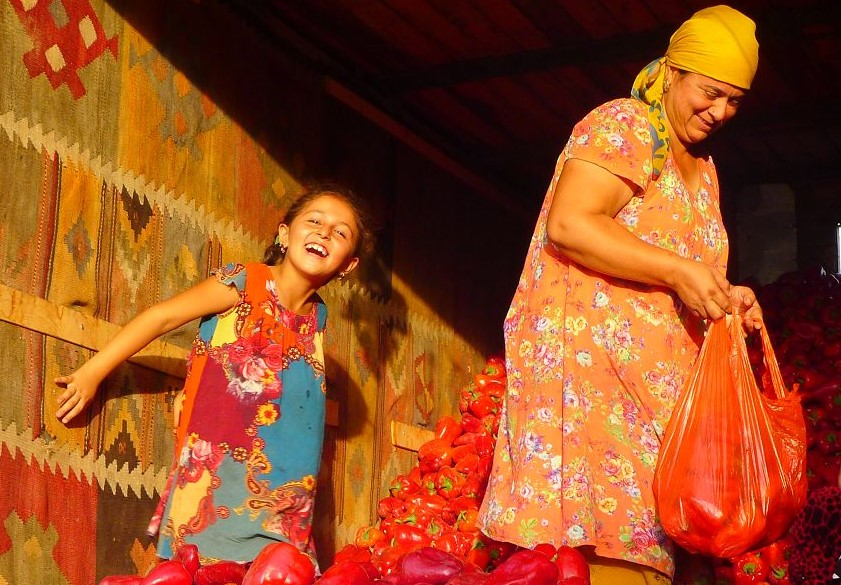 Smiling girl who sells tomatoes with her mom

Despite the fact that most people are kind, it is truly a pain when you negotiate the taxi fare. Every time when you arrive at the station, the quotes given by the first few taxi drivers are often sky high. You really need to bargain hard enough to get the reasonable price; otherwise you would end up with a deal 2-3 times higher than the usual price. Although even without the bargain, the taxi fare is cheap compared with Singapore and Taiwan, the feeling of getting cheated is really what makes me upset.

Could you please guess how much is the TWD/SGD equivalent of the below bank notes? 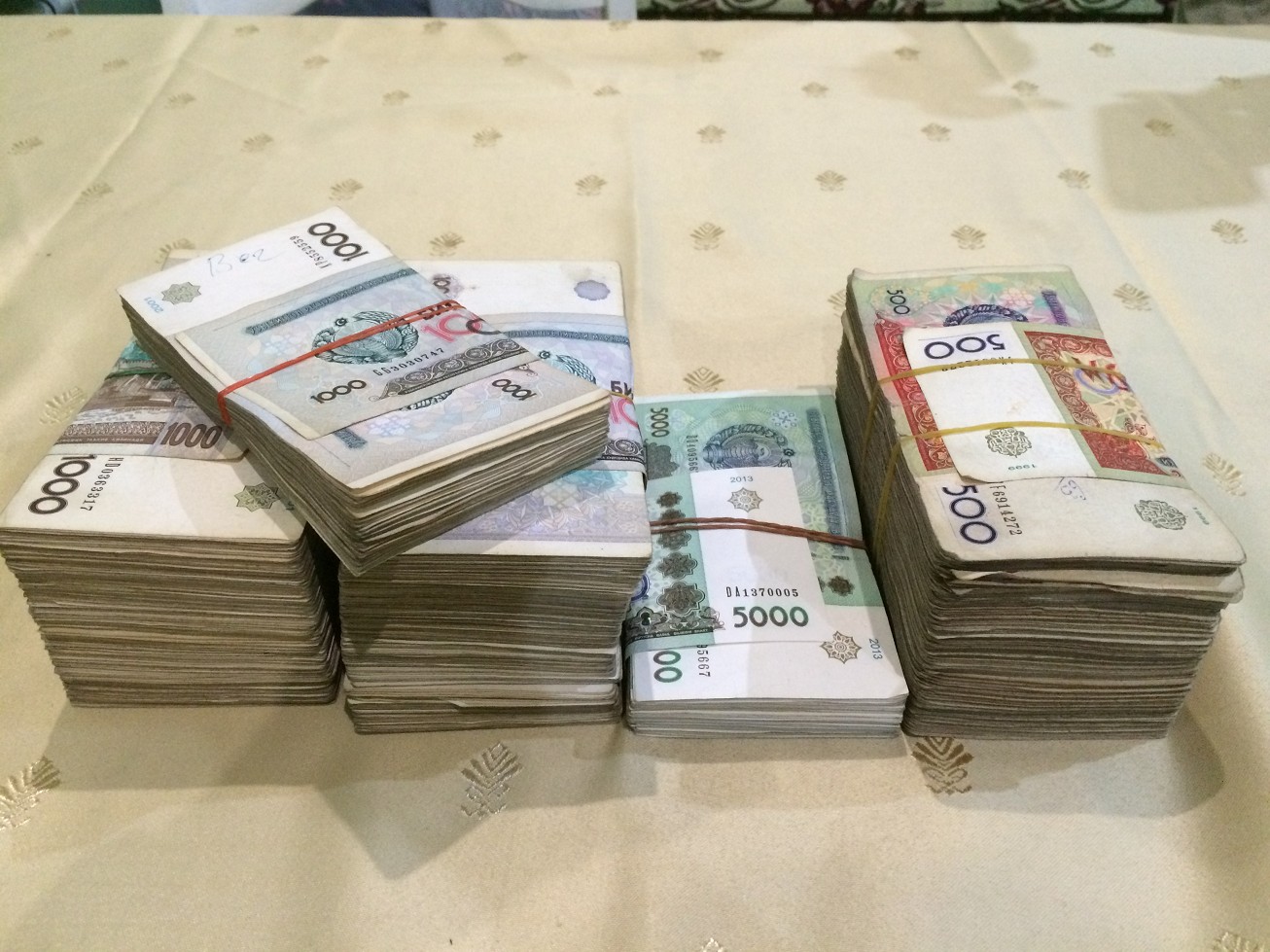 The first day when we arrived in Tashkent, I asked for the help from the hostel to exchange 296 USD into Uzbekistan som (UZS) from the black market. As a result, he came back to me with a big surprise – a black plastic bag full of bank notes that total 1.85 million of UZS, with the biggest notes (and with limited quantity)  that is only equal to 1SGD/25TWD! Suddenly, we became millionaire in Uzbekistan and it was a truly pain to put these notes into our luggage unless we pulled out our back-up luggage bag…

Not surprisingly, it is the most troublesome thing every day before we head out – how to bring bank notes, how much to bring, and counting the notes ; every time when we buy tickets or pay for our meals, it is always a boring repetition of counting notes. It is so boring to an extent that we start to treat judging others’ speed of counting notes as an entertainment. But honestly speaking, it is really a waste of life dealing with bank notes in Uzbekistan. Why can’t the government just issue bank notes with higher nomination? 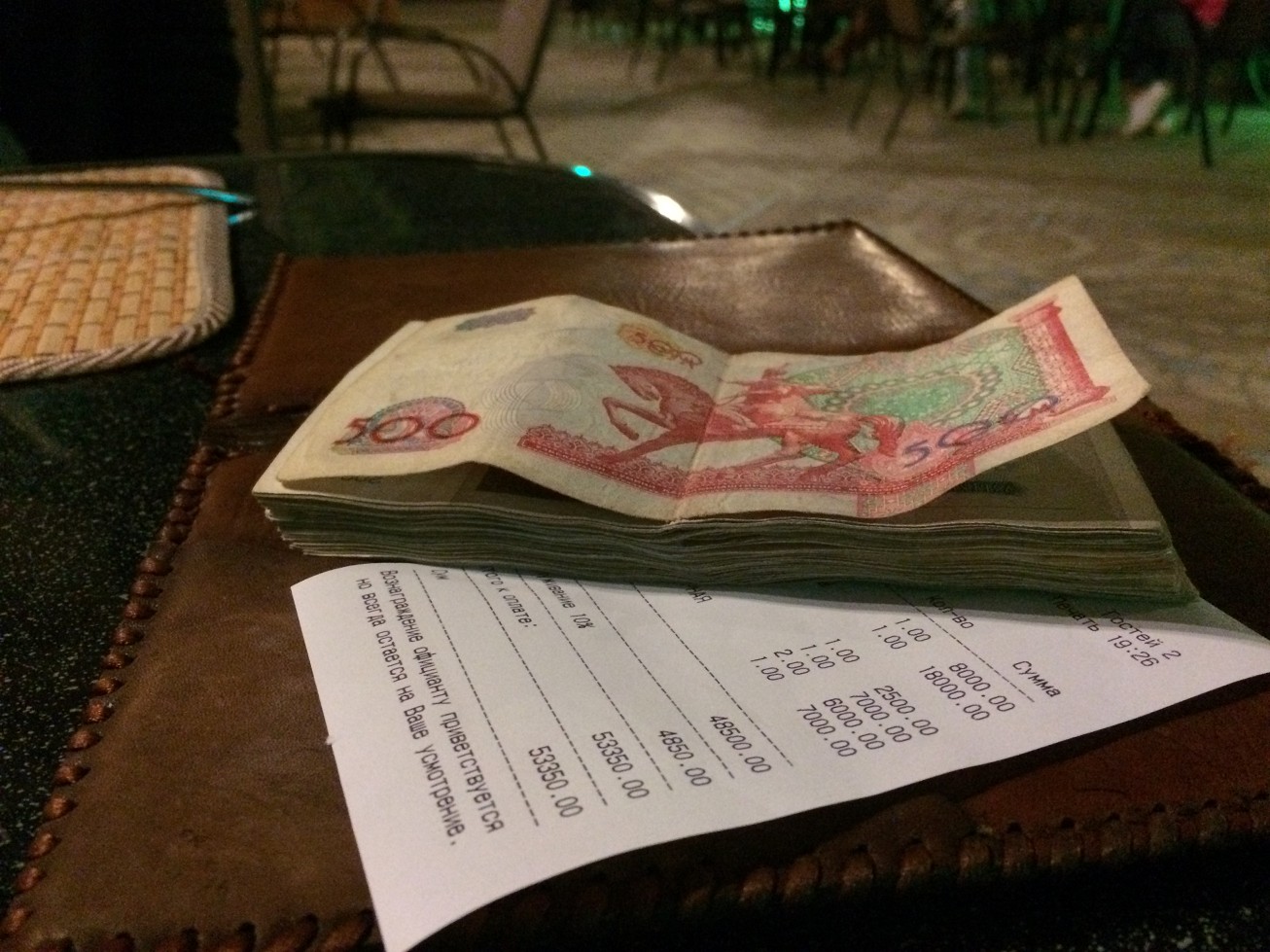 In addition to the super troublesome bank notes, another mystery goes to the huge difference between the official UZS exchange rate vs. black market rate to USD. Take me as an example, the rate that the hostel gave me was 1USD to 6250 UZS, which was more than double of the official 1:3000 exchange rate. Because of this, we would never use credit card for payment in Uzbekistan (but anyway most of the stores don’t accept credit cards). Finally during a chat with a friend that Miss Smile found on Couchsurfing, he told us that the black market derived from the foreign currency control that the government imposes on Uzbekistan nationals. Everyone can only buy up to 2000USD every 3 months. This regulation is very inconvenient for the people who are doing business and need to pay in USD. Therefore the black market exists to serve this purpose by buying USD from foreigners at higher than official rate and re-sell the USD to whom in need at a even higher rate to bypass the foreign currency control regulation. 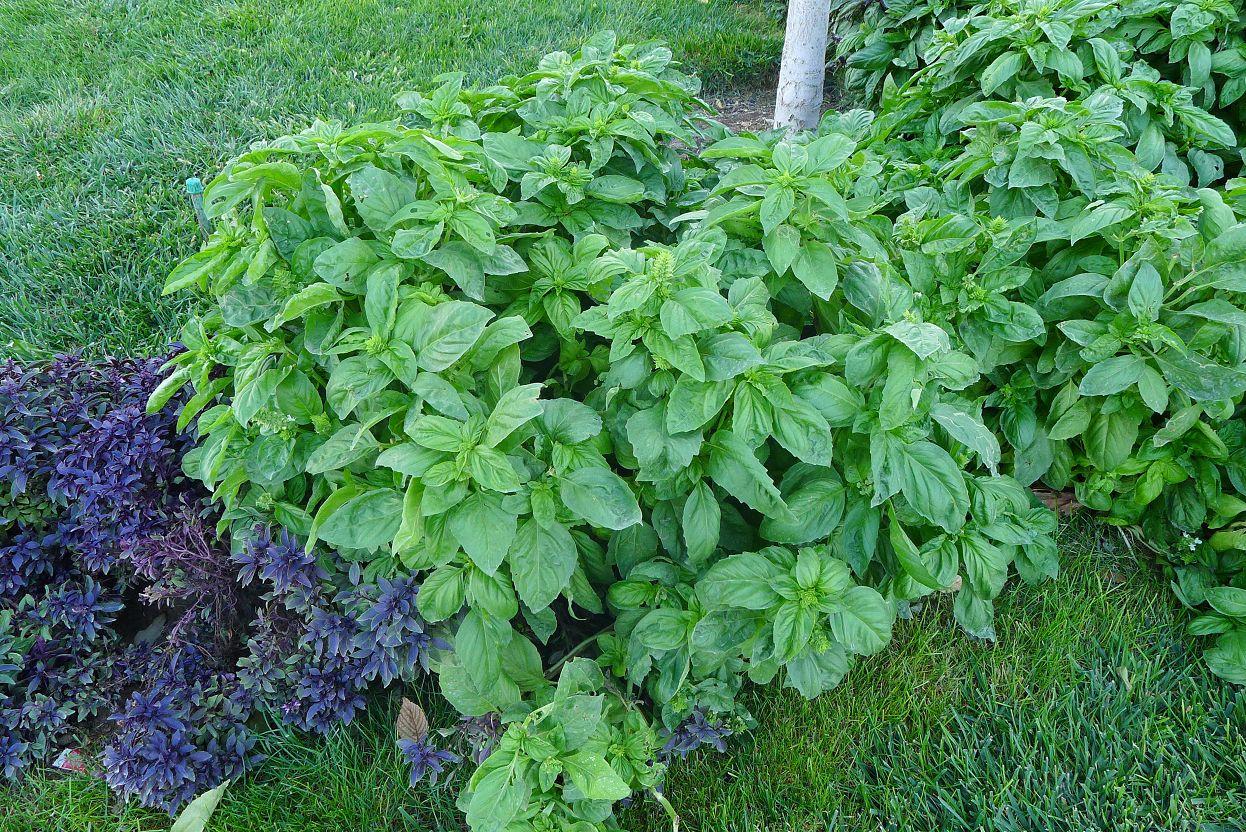 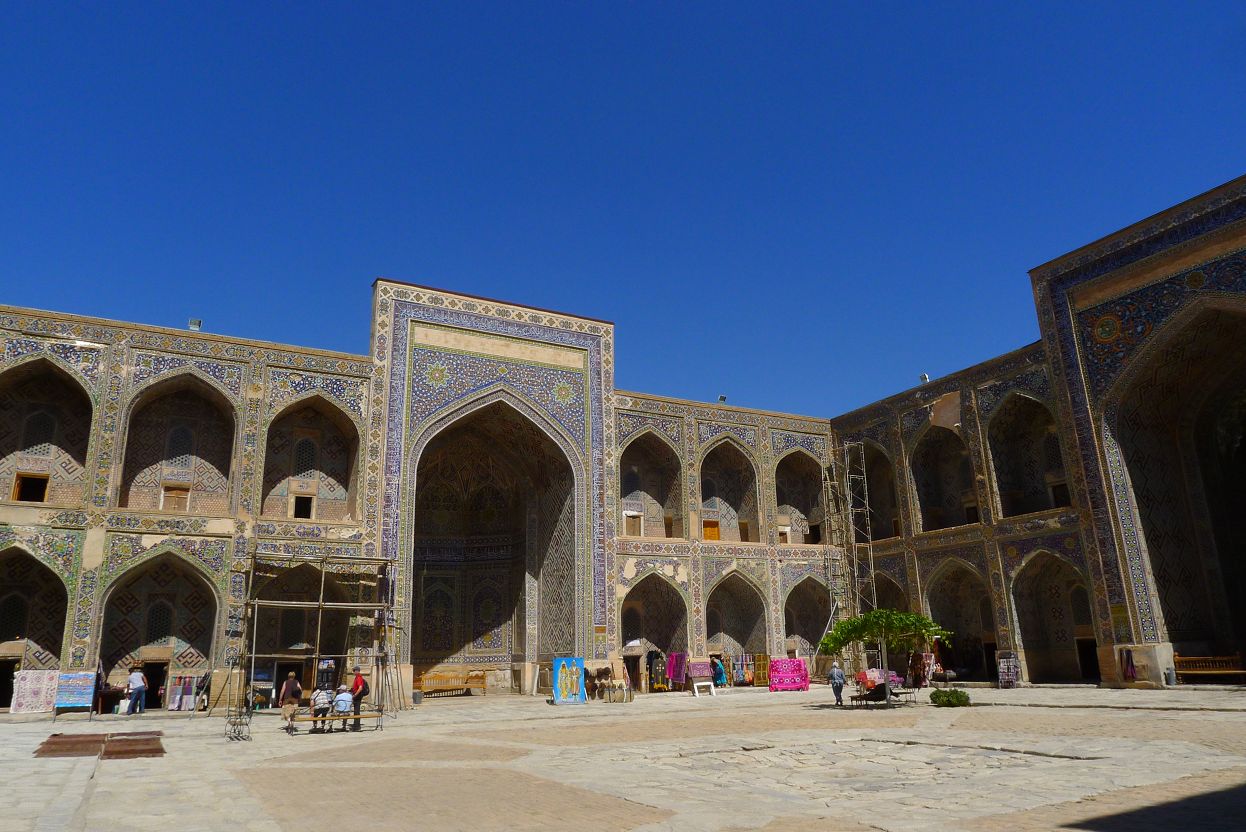